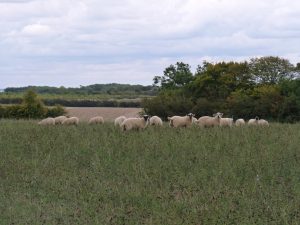 The summer of 2018 was one of the driest on record; at Wimpole Estate in South Cambridgeshire, there was no rain for 52 days. In other parts of the country, there were serious concerns about grass availability for livestock to eat at that moment, let alone provide a crop for winter fodder. However, the diversity of the species rich herbal leys at Wimpole provided silage yields of just under 5t/ha DM in late May, followed by record results on the rare breed lambs that followed after.

Traditionally, the rare breed lambs at Wimpole were sold as store lambs. This was because the lambs were unable to finish on the parkland grass by the time winter came. However in 2018, 90 lambs were weaned onto the herbal leys and seemed to grow by the day. The mixture of Norfolk Horn, Whitefaced Woodland and Oxford Down lambs finished within six months, having spent two months on the herbal leys, with an average deadweight price of £3.62/kg and overall average price just shy of £61/lamb. The majority of the lambs finished in the O3H or R3H category.

In addition to providing market spec. rare breed lambs and good silage yields, the herbal leys kept on giving; the late season flowers were great for pollinators and the clouds of goldfinches were seen feeding on the seeds of the chicory and clover…and it was grazed again at the end of the year!

With climate change making weather more variable, herbal leys can provide the rooting structure below ground and the quality feed above ground throughout the season that a single species ley could struggled to provide. By adding legumes into herbal ley mixes, they can also fix nutrients into soils, reducing the need for artificial fertiliser as well. To learn more about other ways to reduce input use and increase climate change resilience, follow #FABulousFarmers.