Why grass is more than grass

Looking at your lovely green lawn right now made from mown and grown grasses, or even your fields of hay or silage or grazed grass, there is a great deal more there than meets the eye. 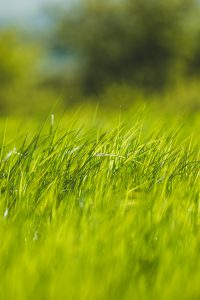 Firstly, assuming it’s a nice day – pop off your shoes and, with bare feet (yes!), stand on the grass and then on a bare surface.  Immediately notice the difference in temperature.  The grass surface will always be cooler. When grasses breathe out (transpire) into our shared atmosphere with the water they draw from their roots, their leaves’ surface temperature goes down by approximately 15degC. They have an increasingly critical role in keeping our planet cool as global temperatures rise with climate change. Long term studies show that grasslands have more of a cooling effect than woodlands.

Grasslands and pastures account for nearly 40% of UK land and act as our largest solar panel. As their green foliage absorbs sunlight (even on a dull day), they also absorb carbon dioxide from the air and convert it to breathable oxygen. A 50ft square lawn will produce enough oxygen to meet the daily needs of a family of four!

The arrival of grasses in life’s evolutionary history on the planet is fairly recent – only approximately 30 million years. The convergence of our evolutionary history with theirs has only been in the last 8000 years. Since then, we have had a very close co-evolution involving herbivores in the mutual merry-go-round of animal and plant domestication.  However, who or which did the domesticating is open to conjecture. 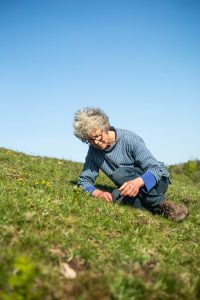 The 12,000 grass species globally (160 in the UK) continue to evolve to changing conditions of climate, soil and grazing pressures.  Their success is primarily due to this adaptability.

But not all grasslands are equal. How they are managed can profoundly impact their value for biodiversity, climate, and farming. In the UK, so-called improved grasslands now make up a large proportion of our agricultural grassland. These grasslands have been seeded to improve agricultural production and are often made up of simple mixes of fast-growing plant species such as ryegrasses. These grasslands often require significant amounts of artificial fertilisers and need to be reseeded frequently to maintain fast growth, both of which come with a carbon cost.

More focus and understanding are being drawn to the role that more diverse grasslands, whether permanent (not reseeded) or temporary can play in securing profits and delivering environmental gain. There is a growing body of evidence highlighting that greater plant diversity can secure multiple win-wins at the farm scale. Herbal leys, for example, include a mix of deep rooting plant and herb species, which help draw down more carbon, improve soil structure, and deliver improvements to livestock health. The inclusion of leguminous plants such as clover and birdsfoot trefoil help fix nitrogen, reducing the need for artificial fertilisers and providing a nutritious food source for hungry pollinators. At the other end of the spectrum, we have species-rich grasslands, which are ecological dynamite created over thousands of years due to a symbiotic relationship between low impact grazing and the land. These so-called unimproved grasslands have never been ploughed or fertilised, meaning they are essential carbon stores.

Benefits of some grass and plant species: 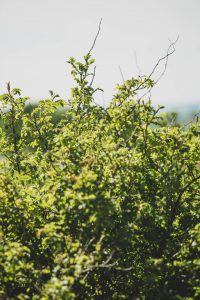 Our ecological partnership with grasses and herbivores has produced our native livestock breeds, an extraordinarily diverse species and ecological richness. Grasslands are some of the most important UK habitats and are vulnerable to change, requiring skilled management. Read more on how to sensitively graze.

But the benefits of grasses aren’t just above the ground. There is a great deal more to grasses out-of-sight. Most of the benefits of grasslands are below the surface and in the soil.  Grasses in large established grassland ecosystems act as key water catchments holding water in the sponge of their root masses and as critical biodiversity reserves.

The dynamic mutual relationship between grassroots and soil biodiversity, where grasses and soil organisms benefit, simultaneously acts as a giant carbon sink, potentially tying up between 15-30% of the world’s carbon.

So all-in-all, grasslands are a planet-cooling, carbon-sinking, water-sponging, biodiversity-banking, food-donating life force. Whatever grassland you have at your disposal, some steps can be taken to improve their value for ecosystem health, climate and farm business resilience 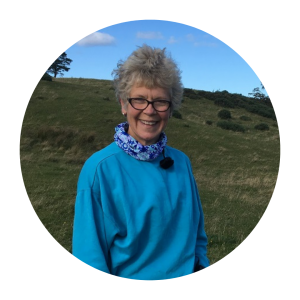 Denise lives in the Scottish Borders where she farms in partnership with her husband and son at Peelham Farm. She studied horticulture followed by degrees at post-graduate level in Environmental Science and Landscape Ecology at the University of London. While developing the fledgling farm business with her husband she had her own practice for some 20 years as a Landscape and Ecological Advisor, during which she also lectured on conservation and wildlife management at Borders College for 9 years. In professional practice, she was a member of both the Chartered Institute of Ecology and Environmental Management and the Landscape Institute. She is now fully involved as a partner in the farm business, in which she is the Managing Partner. She is a Director of Pasture for Life, on the Scottish steering group of the Nature Friendly Farming Network and a Soil Association Farmer Ambassador for Agroecology.