Minister of State at the Department for Environment, Food and Rural Affairs, Victoria Prentis, has today (7 January 2022) said whole farm management is where farming is heading. 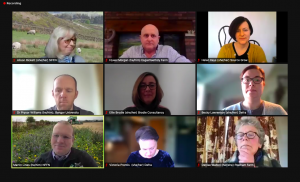 At a panel discussion organised by the Nature Friendly Farming Network (NFFN) at the Oxford Real Farming Conference, Victoria Prentis said: ”The whole farm approach will be at the heart of where we go with the agriculture transition. But most farmers are not ready to do that, though we would encourage people to take the steps to get there.”

The panel event marked the launch of NFFN’s new report: Farming for Climate Action: What are we waiting for? The report outlines a comparison of devolved and UK government targets for climate and nature, alongside an overview of farming and land use across the UK and the main sources of greenhouse gas emissions (GHG) across each farming system. 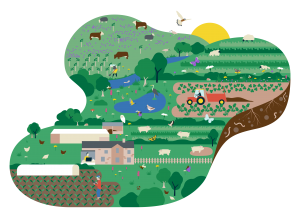 It presents an infographic of a whole farm system approach with eight areas where practices can actively reduce GhGs and support farming businesses in becoming more resilient and protected against the effects of climate change.

During the panel discussion, Martin Lines, UK Chair of the NFFN, said: “Many farmers are waiting for schemes to come in years’ time rather than making changes now because we’ve become so bedded into a payment system that has rewarded land size instead of what we do with that land as a public benefit affecting both biodiversity and our climate.”

When asked what the government is doing to ensure farmers will not be disadvantaged in the transition between old and new schemes, Victoria Prentis said that farming has been “infantilised by BPS payments” and that farmers “will absolutely not be penalised for early [scheme] adoption.”

During the conference session, farmers Denise Walton and Hywel Morgan discussed their transitions towards a whole farm approach that mitigates climate change.

Hywel Morgan, a livestock farmer in Myddfai, farms 230 acres with no fertilisers and a reduction in chemical sprays. He has reduced bought-in feedstocks from 18 tonnes to 3-4 tonnes.

In a move away from soil disturbance, he plants herbal leys with deep rooting systems, including chicory, plantain and clovers. After “too many years” of ryegrass, he said: “As an upland grassland farmer, why would I want to kill off perennial self-seeding grass to plant new grass? I keep asking myself `why did I do this every year’?”

His efforts have resulted in higher soil pH levels and improved carbon storage, including resilience against extreme weather events, such as droughts or floods.

“My income dropped around 20%, but my profits have always gained as the less I spend the better off the farm is. I’m better off now financially than I have been for years.”

Denise Walton, a Pasture for Life farmer in Scotland, said they ditched chemical inputs in order to improve their grasslands through rotational paddock grazing, tree planting and maintaining species-rich meadows.

Denise said: “We changed our grazing system by splitting our fields into smaller paddocks where we rotational mob graze groups of 10 cattle in 10-acre paddocks with thirty days’ grazing and three days’ rest.”

“In the past, we were agrochemically dependent, but since we’ve stopped using sprays and inorganic fertilisers, we’ve seen an incredible improvement in our grass efficiency and its ability to cycle nutrients, including carbon. We’re saving nearly £70k a year with less tractor use, less fuel use and no imported feedstocks.”

Victoria Prentis spoke about her vision for UK agriculture in 10 years’ time, saying there will be a “really good labelling system” which will mean that consumers are “much more aware” of what they’re consuming and that British farming will be producing “at least 60% of the food we eat.”

“I think we will, taken as read, share space with nature on our farms. In terms of the landscape, there will be areas that are spared and much more peatland will be rewetted. I very much hope many more farms will, frankly, look like Denise’s and Hywel’s,” she said.