The Nature Friendly Farming Network and Wales Environment Link co-hosted an event at the Senedd in Cardiff to re-launch the Welsh Assembly Cross Party Group for Biodiversity. One of the main aims was to highlight how future farming policies can benefit farmers, nature and the people of Wales. The event was well attended, attracting farmers, conservationists, Assembly Members and Welsh Government officials.

John Griffiths AM (The Group’s Chair) opened the event and explained that we face huge challenges in tackling climate change and biodiversity loss. The Welsh Government has declared a climate emergency and one of the ways that Assembly Members and stakeholders can discuss these issues is via the Cross-Party Group for Biodiversity.

To start off the event a short video was played, showing nature friendly farmers discussing actions they’ve taken on their own land to benefit nature.  Click on the link below to see the video!

Guest speakers included NFFN Wales’ Tony Davies (Henfron Farm) and Polly Davies (Slade Farm) who outlined some of the excellent work they do for nature on their farms. 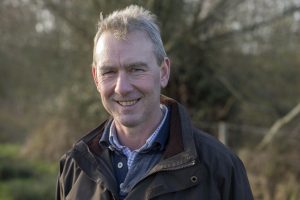 Tony Davies, who farms in the uplands of the Elan Valley, was the first of the guest speakers. First and foremost, Tony describes himself as a businessman, but he feels there is still a stigma against “green farming”. Tony feels the wider agricultural industry encourages farmers to produce more all the time, regardless of profitability. Changing this mind-set is important.

Within a couple of years of taking over the family business he converted to organic and cut the sheep flock by 65%. According to Tony, farming in this way is actually more profitable per head of sheep because it is much less labour intensive and reduces the need to purchase fertilizer and animal feed, reducing the cost. The changes that he implemented also improved biodiversity on the farm, which includes valuable habitats such as heather moorland, hay meadows and woodland. These habitats are home to a number of different species, including golden plovers, curlew and lots of butterflies and moths.

Tony explained that he is often asked what he produces on his farm. Whilst his father would have said “lamb”, Tony’s answer might raise a few eyebrows! Tony sees himself as a producer of environmental services or “public goods” such as wildlife habitats, clean water, flood mitigation and carbon sequestration. Yes he farms sheep and cattle, but regards them rather as a high quality by product of the way he manages his land. 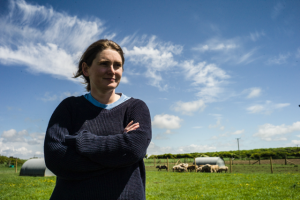 Slade Farm, in the Vale of Glamorgan is a haven for wildlife. The birds, mammals and insects are so visible. But this has only happened through public funding via agri-environment scheme and organic support. Polly highlighted the need to maintain public funding within the industry, but called on money to be better targeted at environmentally friendly farming practices. Drives for efficiency and using every square inch of the land to produce food causes nature to disappear as there is nowhere left for it to live.  We need nature to be valued as a commodity that needs to be invested in.   Farmers need to be part of the solution, but they must be recognised and rewarded for their environmental work.

The event demonstrated the key role that farming and farmers have in looking after nature and the environment – something the Welsh Government needs to recognise if we are to reverse wildlife declines in Wales.