Wales: Tree Planting is Not a Silver Bullet for Tackling Climate Change

On 12th July 2021, the Welsh Government announced plans for woodland creation in Wales. The Cabinet Statement by Lee Waters MS, Deputy Minister for Climate Change, outlines the need to plant 43,000ha of new woodland by 2030 and 180,000ha by 2050.

To help facilitate tree planting, the Welsh Government has launched The Woodland Investment Grant (TWIG) Scheme.  The scheme will provide grants to enhance and expand existing woodlands and create new woodlands in Wales in accordance with the UK Forestry Standard.

The report reads: “Planting more trees is not only essential to help avoid catastrophic climate change but will provide a wide range of other benefits to Wales, including creating ‘green’ jobs, helping to address the nature emergency, increasing well-being, and mitigating flooding and air quality issues. Many of the trees planted will contribute to the new National Forest for Wales.”

There is no doubt that trees play a vital role in addressing the nature and climate crisis – woodland makes us more resilient to climate change and can create a nature-rich landscape that is beneficial to both farmland and wildlife. But when you drill down on the Government’s proposal, their target is the equivalent of planting at least 5,000ha per year. Last year, only 290ha of new woodland was planted in Wales, and annual woodland creation has not exceeded 2,000ha since 1975. In comparison, this is an ambitious stretch and a roll-out to this magnitude could have unintended consequences if not actioned cautiously. 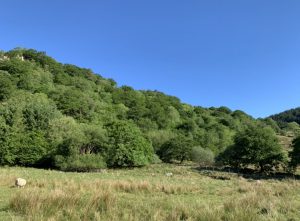 What are the implications?

With over 80% of the country’s land managed by farmers, the sector can expect to play a pivotal role in tree planting’s delivery and it’s not unsurprising that some are treading with caution. What many farmers don’t doubt is that we need more trees in our landscape in order to tackle the nature and climate emergency – but trees are only part of the solution.

Equal consideration should be given to other carbon-rich agricultural habitats such as hedgerows, heathlands, peatlands, species-rich grasslands, hay meadows and multispecies leys. As it stands, degraded UK peatlands emit more carbon than what even the most ambitious UK Climate Change Committee tree planting targets could capture and store.  Should the Welsh Government not offer peatland restoration the same priority and urgency?  Would woodland creation not be better supplemented by targets for restoring hay meadows and species-rich grasslands in Wales? Right now, neither actions are encouraged by nationwide targets.

When it comes to tree planting, we must plant the right tree in the right place and avoid a cavalier attitude that could negatively impact valuable biodiversity. For example, policies that supported a post-war drive for domestic timber production led to large swathes of commercial forestry dominating the Welsh landscape, unintentionally affecting wildlife. These commercial plantations, usually dominated by the non-native Sitka spruce, are more often than not of limited biodiversity value. And to make matters worse, thousands of hectares were planted as single-species forests on upland wildlife habitats.  This most certainly contributed towards losing 44% of our upland heathland between the 1940s and late 1980s.

Inappropriately placed woodlands can also affect some of our most iconic ground-nesting birds. Curlews, a severely threatened species in Wales, tend not to use areas within 200m of forestry as they prefer open landscapes, whilst the associated increase in predator populations (in particular foxes and crows) affects chick survival rates.   In some instances, the opposite of tree planting is more appropriate for contributing to the bigger picture of climate mitigation and nature restoration, where we should be felling trees on peatland or shelterbelts near areas used by ground-nesting birds. 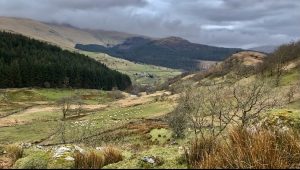 How can farming and woodland creation coexist?

On my family farm in Rhyd-y-main near Dolgellau, North Wales, we have close to 750 acres of hill and mountain land. We have lightly grazed woodland that allows wild garlic and bluebells to thrive and managed in this way means that birds, like pied flycatchers and redstarts, can nest here. 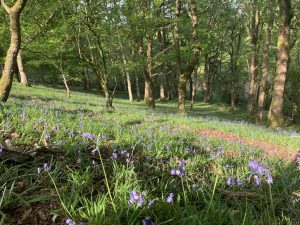 We’ve fenced off unproductive steep hill land to help reduce flooding, improve the soil, store carbon and benefit wildlife. We have embraced a silvopasture approach in some of our fields, where parkland trees and grazing livestock co-exist.

Silvopasture: planting trees in livestock pastures to boost natural and commercial value by offering shade and shelter for livestock in adverse weather and providing nutrients for the livestock.

Scattered trees on the ffridd provide valuable wildlife habitat and we ensure we have open landscapes on our heathland and hay meadows, so it can store carbon and provide a key area for biodiversity to flourish.

Whilst we greatly welcome plans that support and reward farmers for planting trees, hedgerows, shelterbelts and facilitating natural regeneration of woodland – we need a holistic approach to tackling climate change.  We need to ensure that our efforts to tackle climate change also benefit wildlife, farmers and our rural communities.

I’d like to hear your views regarding the Welsh Government’s recent tree planting targets.  Are you excited? Concerned? Cautious? Let me know what you think…rhys.evans@nffn.org.uk