Scotland’s food system is broken, from increasing usage of food banks, workers’ rights not being adequately protected, nature being degraded and poor health in communities. We also know that farming policy, overall, doesn’t deliver enough for addressing the nature and climate crises, with a disconnect between farming and food policies. There are multiple issues facing Scotland’s food system that is leading to numerous fractures and tensions that are not sustainable. 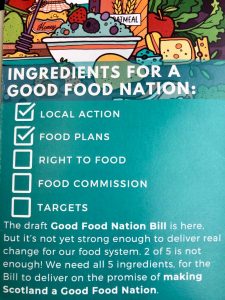 But Scotland has a unique opportunity to change this, with a piece of legislation going through the Scottish Parliament: The Good Food Nation Bill. This Bill, introduced by the Scottish Government, could be a truly transformative piece of legislation, ensuring the food system nourishes us and the planet. It could also allow for greater integration between Scotland’s food system and Scottish agriculture, refocussing the purpose of food production so nature and feeding people are better integrated.

But as it stands, the Bill doesn’t have all the ingredients needed to make this happen. There is a danger it will fail to live up to its name – and its promise. The Bill has currently entered what’s known in the Scottish Parliament as Stage 2 (out of 3). This means there is not much time left before it is voted on and finalised by the Scottish Parliament. The next few weeks mark a crucial period during which MSPs have the opportunity to listen to their constituents and make amendments to the Bill.

NFFN is a member of the Scottish Food Coalition (SFC), an alliance of farmers and growers, academics, workers’ unions and charities focused on the environment, health, poverty and animal welfare. The SFC know that the challenges facing our food system are connected and that we need to work across the whole system to achieve a healthy, fair and sustainable future. The SFC has been longstanding campaigners for a GFN Bill and has been recently working on suggestions on how the Bill could be improved through amendments. You can read more about this on the Coalition’s website here, which has links to everything you need to know about the GFN Bill and recent briefings.

In order to help secure a transformational GFN Bill – what Scotland needs to fix the food system – the SFC organised a Day of Action outside the Scottish Parliament on 26 April to help put pressure on MSPs now to take action and push for a strong Good Food Nation Bill.

People from across Scotland – from the Borders to the Highlands and Islands – came together outside the Scottish Parliament to meet MSPs and demand joined-up action for our food system. This was a chance for Members of the Scottish Parliament (MSPs) to hear directly from their constituents, about the importance of realising the Right to Food and the unique opportunity the Good Food Nation Bill represents for Scotland’s future as a Good Food Nation. The key amendments we are calling for are:

After the Day of Action, Stephanie Mander from SFC, said: “It was a fantastic day, really positive and energised. We were hopeful that 8 MSPs to join us and we ended up having at least 26 MSPs come out to meet us, which was absolutely fantastic – 2 party leaders (LibDem + Greens). We had about 80 campaigners and Coalition partners – some from as far as London, and North Uist – the length of the country. It was an excellent showing.”

More information on these amendments can be found on the Coalition’s website.