Tim Scott is a tenant farmer at Lark Rise Farm, an arable farm in Cambridgeshire, owned by the Countryside Restoration Trust (CRT). 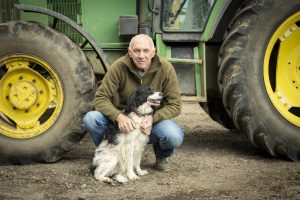 “Wildlife-friendly farming is like a chair – it has four legs, and these represent food, water, habitat, and disturbance. All must be in balance for wildlife to thrive.”

How do you deliver for biodiversity at Lark Rise Farm?

We get the best results for biodiversity by paying attention to the details. That means creating habitats across the farm including grass margins around the edges of the fields next to large hedgerows, and by planting beetle banks that act as wildlife corridors. We also retain over-wintered stubble to feed the birds. In terms of farming processes, we adopt sympathetic methods like using fewer agricultural inputs and varying our crops. Most farming operations will have an impact on wildlife, but we want as much life on the farm as possible. 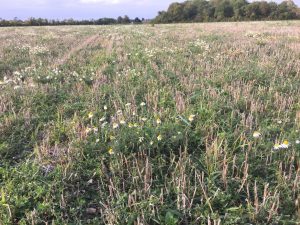 What are the benefits of these approaches, both in the short and long term?

Wildlife-friendly farming is like a chair – it has four legs, and these represent food, water, habitat, and disturbance. All must be in balance for wildlife to thrive. For example, allowing some weeds to grow supports insects, which in turn feed chicks. They also support field mice who eat the seeds, and barn owls who, in turn, eat the mice.

Having insects is beneficial because they will eat pests like aphids off the crops. This also encourages pollinators onto the farm, who we need for specific crops. Having lots of natural predators means that we don’t need to use insecticides. The CRT has a well-established and scientifically-based monitoring system for tracking the impact of nature-friendly farming practices on wildlife and have been monitoring the birds on the farm for the past twenty years. During that time, Lark Rise’s Farmland Bird Index rose, while nationally it has continued to decline. Most importantly, we have seen increases in red-listed species such as a four-fold increase in Grey Partridge, high numbers of Yellowhammer and the return of Lapwing as a breeding species. The farm has benefitted from improved soil health and having a greater abundance of soil invertebrates has encouraged lapwings back onto the farm. 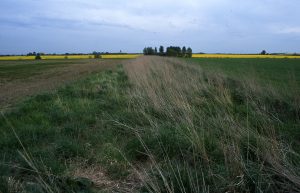 We can also demonstrate high numbers of butterflies on restoration meadows, big increases in bat numbers and water voles. Restoring hay meadows has boosted insect numbers, shown by butterfly transect counts and also by bats visiting these meadows after dark. From a starting point of just one bat per six hours surveying in 1999, we recorded the equivalent of 11 bats per hour in 2019; a 70-fold increase.

What have been the biggest learnings?

The biggest learning for Tim has been making mistakes and learning from these. It has been helpful to understand what the goal is – profitable, wildlife-friendly farming – and to then adapt the farming process to reach these targets. For Tim, maintaining the quality of the soil has been the biggest challenge, and mitigating the impact of the rain on the soil.

How long have you been implementing these nature-friendly practices?

Tim has been a CRT tenant farmer for close to 30 years. He was originally invited because he was already involved in wildlife-friendly farming practices and shared the values of the CRT. One of our founding principles is to appeal to a broad church and to share education and understanding amongst the farming community about why change is important, so involving Tim at this time helped to achieve that. Looking ahead, these conversations are still very much needed to show that there are alternative ways of doing things.