NI: Nature Friendly Farmer of the Year with Farming Life

In Farming Life’s annual award ceremony, the NFFN sponsored the Nature Friendly Farmer of the Year award. Here is the lowdown on this year’s finalists. 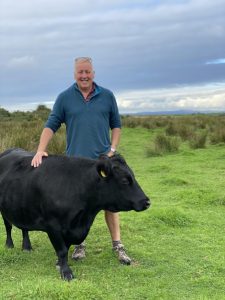 Stephen Alexander – our Nature Friendly Farmer of the Year winner

Stephen and his family run a small herd of Pedigree Dexter cattle on the shores of Strangford Lough near Greyabbey and on tenanted National Trust ground at Groomsport, County Down. They have introduced a range of regenerative farming practices in a desire to farm with nature, and sell their high quality, affordable beef through direct selling and attending local food markets. Their cattle have won numerous awards at agricultural shows and they sell their pedigree livestock to other Dexter farmers. They are NFFN members and certified Pasture For Life Beef farmers.
They farm in a style that regenerates land that has previously been intensively farmed and their aim is to bring biodiversity back, above and below the sward, and to maintain healthy ponds and waterways.

As a result of their nature-friendly farming, the landscape benefits from enhanced biodiversity with a wider range of animal and plant life seen above and below the soil surface. Managing how and when their cattle graze has visibly opened up the sward and increased variety of clover and other plant species. Their grazing regime improves soil quality, which can be observed by higher worm populations when soil sampling is completed. Improved soil health has negated the requirement for artificial fertilisers and they don’t use synthetic fertilisers or slurry. 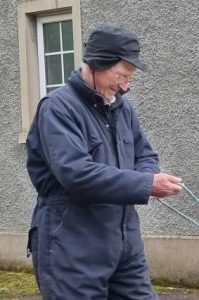 Leslie is a hill farmer, passionate about nature. He farms 70 acres of farmland in Glenwherry, County Antrim, where he has been grazing beef cattle and sheep for 25 years. During this time, he has worked hard to give nature a home on his farm through a range of environmental practices.

As part of the group Environmental Farming Scheme (EFS), he plays a central role in the RSPB’s Curlew Life conservation project, protecting one of Northern Ireland’s priority species. Prior to the nesting season, Leslie cuts the rushes on his grassland to provide prime habitat for curlew. He also grazes his sheep throughout the winter period and his cattle much later in the season to ensure the curlews are undisturbed during breeding. Leslie maintains balance on his farm, keeping stocking rates below the capacity of the land to allow nature to thrive. With 80 sheep and around 30 suckler, his herd numbers are ideal for maintaining the good condition of the land. With such emphasis on quality over quantity, the cattle perform exceptionally well at market.

No pesticides are used on the farm which also helps provide a biodiversity-rich landscape. Leslie is proud of the low intensity practices of his farm, as he sees his work as essential in restoring the good that has been lost on his land. Not only do his efforts provide leys for grazing, but this semi-natural, remote environment sees many species flourish, including curlew, snipe, hare, kestrel, buzzard, and even lapwing in previous years. Leslie’s curlew conservation efforts have faced several challenges over the years, with eggs being lost to predation. To tackle these problems, this year, Leslie facilitated the installation of fencing to protect their nests. As a result, two breeding pairs of curlews nested on his field, with two fledglings taking flight! 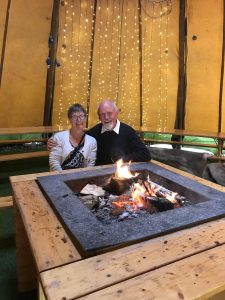 Greer and Maureen Lowe – livestock farmers in County Down

Greer and Maureen farm approximately 50 acres of farmland for hay/silage and livestock grazing. The farmland hosts impressive species-rich grassland and wetland habitat with nature-friendly farming at the heart of the farm’s management.

The farm participates in the County Down Farmland Bird Initiative (CDFBI) – a group project within the Environmental Farming Scheme (EFS) facilitated by RSPB and is a member of the Nature Friendly Farming Network. Greer and Maureen are constantly looking for ways to help improve wildlife habitats on their farmland. Following site visits, RSPB NI identified that a winter food source could really improve the fortunes of a number of priority seed-eating bird species, particularly during the hungry gap, when food is most scarce. Taking this advice onboard, in 2019, the farm entered the Environmental Farming Scheme (EFS) at the wider level to sow a winter feed crop for wild birds (wild bird cover) providing an essential winter food source habitat.
This year the farmland has been approved for the Higher level of EFS due to the impressive species-rich grassland. The nature-friendly management of the grassland ensures a rich mixture of native flowers, grasses and sedges. The rich variety and abundance of flowering plants provide a great source of pollen and nectar for many pollinating insects such as bumblebees, hoverflies and butterflies. The abundance of insects, in turn, provide food for birds, bats and other small mammals.

The farm has also been seeking advice and guidance to install a barn owl box to support this critically endangered and iconic farmland bird in Northern Ireland – contributing to a network of boxes across the Strangford Lough and Lecale landscape. 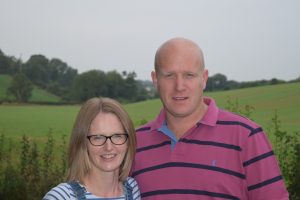 Shaw and Fiona Hanna – arable farmers in County Down

Fiona and Shaw are arable farmers growing wheat, barley, oats and oilseed rape crops in County
Down. They have been working closely with RSPB NI to seek ways in which to improve habitats for nature on their farm. They participate in the County Down Farmland Bird Initiative – a group project within the Environmental Farming Scheme (EFS), facilitated by RSPB NI.

The farm entered the Environmental Farming Scheme creating habitats through the retention of winter stubbles and the provision of winter feed crops for wild birds. These habitats are a hugely important source of winter food for a number of priority farmland bird species. After harvest, large areas of stubbles are retained throughout the winter months. These stubble fields not only offer cover for wildlife but also provide a vital source of winter food for seed-eating birds as well as opportunities for broad-leaved arable weeds to thrive on the farmland. During the winter months, you will see birds like yellowhammers, skylarks, tree sparrows, linnets, and reed buntings all foraging throughout the fields.

Several plots of winter feed crop for wild birds (wild bird cover) has now been created on the farm to further enhance the winter food source available for farmland birds. The winter feed crop is made up of oats, barley, oil seeds and sunflowers – a diverse mix of seeds to cater for a wide variety of bird species. The inclusion of sunflowers also provides a plentiful source of pollen and nectar for pollinators on the farmland.

Shaw and Fiona have also contributed to the educational side of nature conservation this year. Their farmland was showcased in a short film about on-farm nature-based solutions to the nature and climate emergency as part of the NI Science Festival in March 2021. Due to the pandemic, the NI Science Fest was an online event this year. Guests were able to join a digital tour of Shaw and Fiona’s farmland learning about what can be done to protect and restore nature on farms. 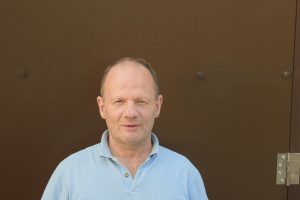 Seamus runs a small livestock farm of approximately 25 acres, near Fintona in County Tyrone. As a farmer he is conscious of the fact that he does not ‘own’ the land, rather he is a custodian of the countryside that has been ‘lent’ to him. He has therefore adopted the ethos of trying to farm in a way that contributes to him making a living at the same time as protecting and enhancing the environment.

Under his own initiative, Seamus has integrated a wide range of nature-friendly features into his farm business. He has planted hedgerows interspersed with beech saplings and created a small area of native woodland containing approximately 200 native trees, including oak, hazel, beech and ash. This area is fenced off to prevent damage caused by livestock browsing.

There is also a small area of species-rich grassland that he grazes sensitively to promote wildflower diversity. This area supports healthy populations of various orchid species, ragged robin, vetch and bird’s foot trefoil amongst others. This year he set aside approximately half acre to provide wild bird cover, containing a mix of barley, linseed and other seed-producing plants.

Mindful of the widespread decline of pollinators and a general decrease in insect life, Seamus has cultivated a small area, planting apple and plum trees and then sowing the whole area with wildflower seed. Taking advice from a non-profit organisation named ‘Meadow in my Garden’, he has sowed one side with wildflowers design to attract bees and the other side for targeting butterflies. With the good spring and summer weather this year this proved to be a great success with an abundance of wildflowers and plenty of insect life, including grasshoppers, bees, butterflies and ladybirds. He hopes to add a small pond to this area at some point in the future to enhance the wildlife appeal further.

In addition to creating these habitat features, Seamus has built and installed his own owl box in an old byre and allows swallows to nest in some of his sheds by leaving the doors open through spring and summer to provide them with unhindered access as they rear their young.