Wales’ Global Ecosystem – an Insect Blog from the Ceiriog Valley

The more we look, the more we realise how much important stuff is going on connecting distant ecosystems. 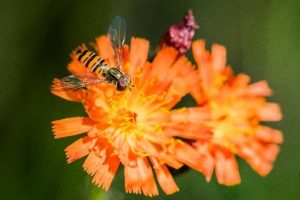 I am going to tell you a story about an insect we see daily through the summer in the Ceiriog Valley. The marmalade hoverfly (Episyrphus balteatus) is around 12 – 18mm long.   She ably demonstrates the global role our Welsh valleys and mountains play in the biodiversity of her global environment.

“One Ceiriog Valley morning in late summer a tiny, new, marmalade hoverfly awoke and felt a feeling in the air, was it a shortening of the days, perhaps, or a chill wind, or a change in the light? She knew she had a different purpose to her parents. She needed to journey south to find a warm place to lay her eggs. The Valley was getting too close to winter. “

Millions of other marmalade hoverflies, other flies, butterflies, beetles, dragonflies and birds do exactly the same thing. They head south across Wales and England, Norway and Finland, France and Germany, Russia and the Middle East, towards the Mediterranean basin and beyond.

“As she reached the Pyrenees, favourable winds in French valleys funnelled her up and over the col into Spain, where she rested a while to feed before carrying on southwards. Exactly how far south she could have ended up, researchers are not sure (yet) but there is a reasonable possibility that she flew well into Africa before settling to lay her eggs on the green vegetation and live out her remaining days under the sun.

Her children and grandchildren stayed local until weeks and months later the urge to move made the newest generation follow the spring ‘green wave’ north. This journey was a different, multi-generational, journey, not a ‘one fell swoop’ like great great great…. Grandmama’s. Each new generation would move a little further north as new food sources grew.”

Hoverfly larvae are voracious predators of aphids and other plant eaters, so lag slightly behind the first appearance of green shoots; hatching to coincide with burgeoning food populations. Adult hoverflies are nectar eaters and important pollinators (like bees except that most bees do not migrate).

On their journeys north, migrating insects inadvertently carry grains of pollen which can improve the gene flow between plant populations across the continent. This is a vital component of biodiversity and one which migrating insects are often responsible for performing. 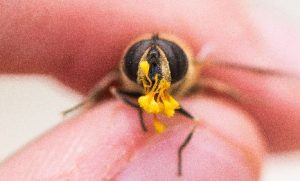 “At last, in May and June – several generations down the line – the tiny hoverfly that was hatched in the Ceiriog Valley last summer has returned, or at least her genetic material has, to pollinate my plants and lay eggs enough to build a new army of larval predators to eat the myriad aphids and other small plant predators in my garden and hedgerows and crops.”

Millions of insect migrants migrate across Europe every year. Many, if not most, provide immense but often unrecognised services. Almost all our fruit and vegetables are pollinated by animals and the health of our plant populations relies on good genetic diversity.   Migrators also deposit nutrients in the inevitable rain of nutrients when they die.   Nutrients circulate across countries and continents every year as migrants breed, eat, move and die. Indeed, in the far northern permafrost migrating insects may be the primary supply of nutrients.

Political boundaries are irrelevant to migrating animals, but human practices in farming, building on landscapes, use of pesticides and herbicides and soil health often create boundaries that restrict biodiversity. However, farming methods can also maintain, expand or create habitats, refuges and havens. 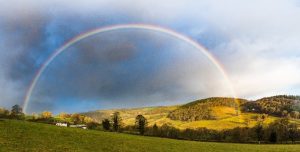 New discoveries about insect migration reveal in sharp focus the global nature of our farm environment and the value of maintaining and reinstating good habitat to support this movement of pollinators, plant genes and pest controllers.

We share our farms with insects who live on a continental, even global scale, tied intimately in with the way land is managed across thousands of miles. Nature friendly farming, and the types of farming systems that the Network is trying to encourage and mainstream, play a vital role in helping our insect allies.

For more about work on insect migration, follow the Genetics of Migration Lab on Twitter which has links to public talks and interviews to listen to when relaxing after a hard day, through to scientific papers for a wide-awake moment.

This is science at its relevant best, connecting with the public (and welcoming questions!).

About the author, Sarah Hawkes.

My home is in the Ceiriog Valley.   I work lambing seasons on a neighbouring farm with 500 ewes.  I grew up in rural Somerset where I worked for the Waldegrave Estate in the cheese dairy and farm office before a spell in London.  My background includes working with the invertebrates and amphibians at London Zoo, studying natural history with the Open University and a fair bit of travelling looking at amphibian communities in the far east, Australasia and NW England.

Welcome to the first ever NFFN Wales blog! As a steering group we thought a monthly blog would be a good way of keeping members in touch 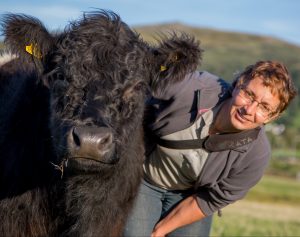 with what we are up to on our farms and our thoughts on current political events that will affect the future of farming.

I am Hilary Kehoe, the NFFN Chair for Wales so I’m starting things off with an introduction to my farm in North Wales, why nature is so important for farming and food production and why we need a new agriculture policy that rewards nature friendly farming. 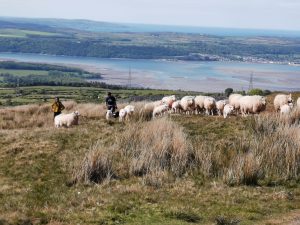 My husband and I manage Tyddyn Isaf, which overlooks the Menai Straits near Bethesda. We have mountain rights on Llanllechid common for our Welsh Hill flock and graze our Highland and Belted Galloway cattle and Manx Loughton sheep on nature reserves from Pwllheli to Bangor, Anglesey and the coast below the farm. We also run a countryside contracting business with two of our grown-up children which incorporates our grazing livestock into management of the nature reserves for the Wildlife Trust, Local Councils and holiday parks.

With the right grazing our animals create conditions for a range of species and habitats such as grassland waxcap fungi, breeding waders, leeches, wildflower meadows, wetlands, sand dunes and heathland. The sheep and cattle are finished slowly and are marketed through local butchers or as premium meat through local sales. Although we are not registered as organic the farm is run on organic principles with no fertiliser, herbicides or pesticides used.

Although it’s been awfully dry recently, we find that the deep-rooted native plants in our species rich grasslands help the land withstand the dry weather, whilst more intensive ryegrass fields get burnt off. The wide variety of herbs growing in species rich swards also control worms, which we only treat for after testing the animal’s dung. This also makes for better tasting meat! The wide variety of herbs in our grassland and wild lands increases the omega 3 and linoleic acid in the meat which enhances its flavour.

Plenty of tall trees in our hedgerows (which we manage on a 3-year rotation) provide shelter from the sun and bad weather. The healthy soils, hedges and trees on the farm also sequester carbon, absorb water and reduce flooding.   For us, nature friendly farming just makes sense. As the UN stated in their recent report on Biodiversity for Food and Agriculture;

“Biodiversity makes production systems and livelihoods more resilient to shocks and stresses, including to the effects of climate change.” 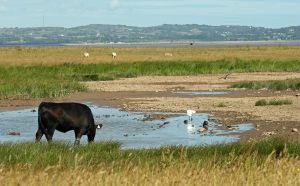 As you can see, our family is passionate about our way of farming with wildlife. Even though there is a lot of cattle herding and boggy tiptoeing involved, we can see the benefits around us and delight in watching for the latest earthtongue fungi, flowering orchid or lapwing chicks. It is great on the nature reserves to engage with visitors and explain why the animals are there and what they are achieving. (They can also be helpful in locating the odd lost cow!)

Everyone can play a part 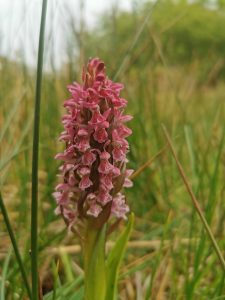 All farms, whatever their system, can be nature friendly – whether it is by creating wider headlands for wildflowers and connectivity for voles, bats and birds; planting a wider mix of species into productive grasslands, or planting copses and managing hedgerows in a more wildlife friendly way. Small changes can be great for nature with minimal effect to the farm, and often yield unexpected improvements to farm performance. Have I piqued your curiosity? If so, click here for advice on Nature Friendly Farming.

Whilst the UK Government is developing an Agricultural Bill, the Welsh Government is also busy developing its own farming policy for Wales. Without thriving biodiversity, the ability of our land to keep producing food is under increasing threat, so this is a great opportunity to design a new policy that rewards nature friendly farming that helps maintain and enhance our wildlife and natural environment.

Promoting agroecology, regenerative agriculture, nature friendly faming (whatever you want to call it!) and rewarding farmers for helping nature to thrive, instead of making payments to intensify food production in inefficient and polluting ways, is a better choice for food production, communities and the environment.  I feel very strongly that we must work together as nature friendly farmers with local people and organisations to encourage the UK and devolved Governments to support farmers to work with nature, rather than against it – before it’s too late.

Your support is vital in order to achieve this change. If you’re passionate about farming and nature, then why not join the Nature Friendly Farming Network? You can sign up as a farmer or a nature lover (for free!). Every voice counts.