County Down farmer and member of the Soil Association Farmer and Grower Board, John Carson farms 380 acres, 30 miles east of Belfast in Co Down, Northern Ireland. His family has been farming at Ballyrenan Farm near Downpatrick for nearly 60 years. In 2005, when his son Jonathan returned from college, father and son decided to take the farm organic. Suckler cows, beef cattle and cereals are the main enterprises on the farm, with 20 acres of kale grown for winter feed.

John is a board member of the Soil Association and Chair of Organic NI.

Why do you support nature friendly farming?

The number one reason that I support nature friendly farming is that we were farming in a very nature friendly way ourselves and I began to want to take a leadership role. Many farmers are not good ambassadors for the excellent work they are doing. I wanted to represent and inspire other farmers.

I would like to get as many farmers on board as possible, representing the whole of the UK, from Scotland, England, Wales and Northern Ireland.

What nature friendly farming approaches have you implemented on your farm?

We made the transition to organic arable farming and diversified into organic sheep and suckler cows, which are all finished on the farm with home-grown organic feed. Our key focus has been on using clover-rich swards, developing new grazing systems and exploring the use of new technology to increase productivity and supporting nature and wildlife on the farm. We also have a strong focus on animal health and traceability.

We are also managing 16 acres of newly planted trees. In just three years of growth you wouldn’t believe the vegetation and wildlife that is coming back. We’ve even got the cuckoo back.

What impact has this had?

When we started to farm organically we saw a huge difference. One of the biggest things we found was that it takes a year or two for soils to adjust. The grass roots come up looking for fertiliser fix. They’re like an alcoholic, they keep looking for that fix.

After about two years the roots go down deep. This is good for us – we’re in a very dry area here where drought would be a problem. Dry weather is not affecting us the same way it did in the past.

We need to look at what we’re doing to the soil. When we used to farm conventionally, we wouldn’t see any gulls following the tractor, as there weren’t many worms. Now when we plough, the sky is thick with gulls. The worm count has greatly improved. The whole feel of the soil is very different when farming in an environment friendly way, when not sowing fertiliser and using chemicals.

What role do you see farmers playing in protecting nature?

Farmers have always played a very important role in protecting nature. Look at the great work of our great grandfathers and generations before them. Look at the hedgerows that were put up hundreds of years ago.

We all rely on farmers to maintain the four inches of soil keeping us alive. Every farmer is working with nature – whether that is sowing crops or delivering calves – we are always working with nature. If it wasn’t for natural systems such as the rain, we just couldn’t farm.

The challenge now is for farmers to leave something behind for future generations. Global warming means we need to start farming differently and looking after nature in a different way.

One of the reasons that farmers need support is because food is too cheap. Many years ago, it took about 35% of an income to provide food for a household. Now it’s about 10%. In this context, you can see the support we receive is not a lot of money.

In mountain areas, farming provides a vital function by keeping habitats in good order. Some areas need to be grazed to be maintained, otherwise they would get out of control.

Consumers like to have the choice of organic produce, but organic farming needs support. Where I might have had 20 animals in a field before, I have 10-15 now, so yields are obviously reduced. Farming in this way means that you are not taking out of the ground in the same way.

Why is Brexit an important opportunity for nature friendly farming?

It is currently quite uncertain. Change can be good and it can create opportunity. But we don’t know what this is going to be yet. A lot depends on the trade deal we get when we do leave.

We’re promised a lot by the present government, but what if government changes? We need a 25-year plan, for both agriculture and the environment. A four or five-year plan is not good enough for farmers, especially if it can all change after an election.

That said, there is an opportunity to have our voice heard through organisations like NFFN. Farmers need to work together, singing from the same hymn sheet if they are to get the message across.

As a member of the European Union, there has been a lot of support for nature and organic farming. One of my concerns is that we won’t get that support from the UK government.

I am also concerned about future trade deals. Cheap imports, for example from Argentina, could flood our market with produce. I would be very worried about a trade deal between UK and South America, which could be devastating for farming. The government obviously wants food as cheap as they can get it, there are a lot of votes in that. But cheap food also leads to food waste – around 30% at this present time. The thought of it nearly stops you sleeping in your bed at night.

What’s the value of bringing farmers together in the NFFN?

There is a social sharing element about the NFFN which is important – farming can be a very lonely occupation. In Ireland, one in five farmers has suffered from depression or mental health issues. By coming together, we swap ideas and learn from one another.

Farmers need to know how to farm in a nature-friendly way, but it is equally important that they know how to make their business more profitable. As farmers manage about 74% of the land in the UK, we need to keep farmers farming. 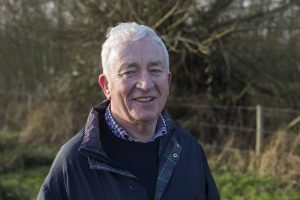