Farming is changing – from the sole purpose of producing as much food as efficiently as possible to a new future where food production works alongside climate mitigation, biodiversity restoration, improved water quality and increased soil health. There is a pathway where farming can secure these goals in tandem, but finding it is not always easy. It relies on decisions that seek to maximise benefits while avoiding trade-offs and unintended consequences. These vary from farm to farm and from landscape to landscape; what might work in one area or system could adversely impact another. Take tree planting, a vital tool in the armoury of climate action, but planted in the wrong area can lead to biodiversity net loss, crowding out rare plant species or leading to carbon losses from the soil. These unintentional outcomes highlight some of the complexities of developing an effective climate mitigation strategy at the farm level. 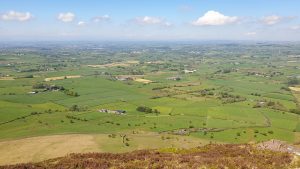 As many farmers begin their first steps to a climate and nature-friendly future, how can we help them make decisions that benefit their business, climate and biodiversity, and how do we measure success? These were some of the critical questions posed at the beginning of our carbon and biodiversity auditing project, which worked with 35 farmers in Northern Ireland to deliver an assessment of the carbon footprint and biodiversity value of their holdings.

Carbon audits are gaining increasing prominence across the UK, with several different tools available. These aim to indicate a farm’s emissions compared to what is being sequestered by soils and natural vegetation, offering high-level recommendations on what farms can do to reduce their emissions. Biodiversity auditing is less prominent, which assesses all existing farm habitats and consequent biodiversity value. Our project sought to provide a holistic view of the farm to help inform on-farm strategies for delivering climate mitigation and biodiversity restoration hand in hand. 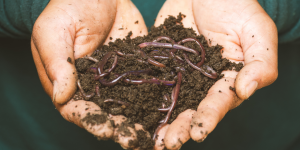 We used the Agrecalc carbon calculator for our project to deliver carbon audits to provide a reading for the farm’s carbon footprint. The audit covered the total footprint, emissions per output unit, and hectare. We also completed a detailed habitat survey of each farm to highlight the full range of semi-natural habitats found on each farm, ranging from hedgerows and ponds to rare and threatened grassland habitats. The project also conducted soil analysis to provide soil pH and soil organic matter results as essential indicators of carbon storage potential. Following the development of the audits, we provided farmers with information and advice on the steps they could take to maximise their holding for climate and biodiversity and highlight any trade-offs and risks that may exist.

It was clear that farmers want access to the correct information and knowledge to make informed decisions about the future. There was a demand for services which help farmers understand what steps they can take to reduce emissions and restore biodiversity. Knowledge sharing will be crucial in efforts to assist the industry in a transition to climate-friendly farming.

Carbon auditing provides a helpful tool in which farmers can determine where they are now, compared to where they will be in the future and where they stand compared to their counterparts. However, auditing will never be able to provide a complete picture of emissions and sequestration taking place at the farm level, as this is based on several assumptions and aggregated data. But this should not discount the role they can play in helping farmers assess where and how changes can be made.

Looking solely at reducing the carbon impact of farming could, in some areas, have adverse effects on biodiversity, which is essential for climate mitigation and adaptation and which we also have a duty to protect, enhance and restore.

Auditing tools focus heavily on emissions per unit of output, favouring production efficiency as the critical metric of success. In many cases, intensive systems score well, while extensive systems, with a higher level of emissions per output (but lower emissions per hectare), fare less favourably. However, these systems often are of immense value for biodiversity, which is often unaccounted for and would be negatively impacted by efforts to reduce emissions per unit of output. For example, the liming of semi-natural habitats, reseeding, and changes in grazing management would negatively impact biodiversity while also releasing carbon from semi-natural habitats, which are already an important carbon store.

The biodiversity audits have provided a valuable snapshot of the nature value of farms within Northern Ireland, covering a range of different systems and farm sizes spanning the country. This highlighted the diverse range of habitats in Northern Ireland, from species-rich acid grassland, blanket bog, native woodland, hedgerows, and temporary habitats such as wild bird cover, rough grass margins, pollen, and nectar mixes. The level of habitat diversity varies considerably on a regional basis, with a high proportion of priority semi-natural habitats found in low-intensity farming systems in the West to more common habitats in the South East. However, every farm surveyed had valuable habitats from a carbon and nature perspective. This is particularly relevant with hedgerows, which made up around 3% on average of participating farm holdings. This highlights the value of hedgerows as a “quick-win” habitat for biodiversity when enhanced through improved management in the future.

Meet some of the farmers who took part in this project and hear their perspectives on starting out on a nature-friendly farming journey:

The coming years will bring significant changes for farm businesses in Northern Ireland. We have new farming policies on the horizon, ambitious climate targets to meet, and an overarching need to restore the biodiversity on which all long-term food production depends. These transitions will be challenging for many, but all farmers can move to profitable nature-friendly farming with the right schemes, knowledge, support, and advice. Enabling a better understanding of farm business from the perspective of nature and climate plays an essential role in doing this. The biodiversity and climate crisis are interlinked, and we must address them simultaneously. This twin-track approach should be reflected in future policy, especially in developing a baseline to assess progress and aid long term decision-making.

Our thanks go out to DAERA for funding this project as part of the Environment Challenge Fund and to Ulster Wildlife for delivering the carbon and biodiversity audits.