Reflections from a Dumfriesshire farm
January 2020
Morning has broken. It’s still dark and I’m up to feed and check on the animals-always our first priority. Most of them are in the sheds at this time of year (although never our Highland cows, which brave the elements come what may) and depend on us to carry their feed to them and to keep them well-bedded with straw and watered. 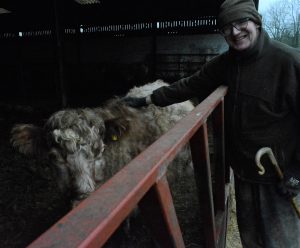 I always speak to them, particularly when it’s still dark, before they see a shape looming out of the darkness. Animals get to recognise familiar voices and it’s important not to scare them. The cows and the mares are heavily pregnant now and should begin giving birth within the next 6 weeks or so. One of the cows-Rosie-always answers me with her distinctive low “moo”, as if to say “what, you again?”
Our Jack Russell terriers, Wilfie and Minnie, accompany me on my morning round; and Tam, our cat. He may be one of the smallest animals here but he can more than stand his ground. He likes to check that I’m doing the job right. The cows all seem to know him. He rocked up as a young stray 3 years ago and has made himself “Numero Uno” since; think the cat on “Shrek”. We’d be lost without him.
The short days and stormy weather at this time of the year mean it’s a constant race against time to get things done. Feeding and scraping out and topping up the bedding for the animals takes up the lion’s share of the daylight hours, with the morning routine more or less repeated in the afternoon. I use a  graip-a pitchfork- to push the silage towards the cows rather than a machine because I’m keen to keep our carbon footprint as low as I can and my ageing body functioning for as long as I can-a challenging combo!
We farm near the Solway, which is the main wintering ground for thousands of greylag geese. In the morning, they lift off and fly over us on their way to our neighbours’ fields and in the evening, they fly back to the Solway. There can be as many as several hundred in the sky, great skeins in their arrowhead formations, calling to each other as they fly. You hear them before you see them-an extraordinary sight and sound which makes the hairs on the back of your neck tickle. 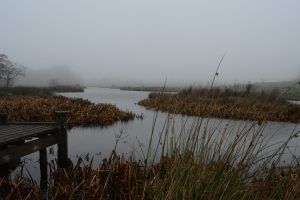 Winter is when I do most of my new hedge and tree planting. So far this year, I’ve planted over 3000 saplings, just to replace the plants lost in my new hedges since last year. I still have another 1200 metres of brand new hedging to do plus another new small wood of native broadleaf trees. So that’s another 9000 or so more saplings still to plant, to say nothing of the fencing that I still need to do first. You can see why I’m always racing the clock! All the rain we’ve had has made planting easier but fencing a nightmare. Some farmers are never happy!
We would be struggling without the income from our holiday cottages. This tends to be a quiet time of year for them, which leaves more time for other things, like planting new hedges and fencing but puts enormous pressure on the cashflow. Farmer are so much the poor relations of an industry which supports so many other businesses downstream, like machinery dealers and feed suppliers, who earn so much more for their efforts. Nobody can accuse us of doing what we do for the money. But nobody forces us to do it either. On a good day-and there are many of those here -there can be no better job in the world. Here’s hoping for a drier week ahead!
February 2020

I knew something wasn’t right as soon as I saw all the feathers. There were just too many. The fox had killed all our hens. It was a miserable way to start the day. I knew them all. They were good buddies and gave us lots of eggs. Life on a farm can be very bruising. We’ll need to get some more but I’ll need to reinforce the anti-fox measures first; no small job when you know how persistent a crafty fox can be.

Oh, and I managed to reverse the telehandler into Shirley’s horse lorry. Oops. Another senior moment. She’d moved it “out of the way” to avoid it being blown over by the gale force winds we’ve been having. Hmmm. I did say “sorry” and that I would pay for the repair.
On a brighter note, the snowdrops are well out and our first daffodils came into bloom on 11 Feb. We planted thousands down each side of the farm drive when we came here  but there are gaps now where the badgers have dug some up for the sugar in them. Badgers have a sweet tooth but I try and give them enough peanuts in the woods to keep them there. Our holiday cottage visitors like to watch them on their TV’s, which are linked to cameras in the woods. Watching them can become addictive. We love to watch their family squabbles on the camera linked to our “snug”; much better than watching those endless adverts!
I had to do a double-take when I checked in the big shed earlier this month. One of our cows had given birth to a calf. How could that have been possible when she wasn’t due for at least another couple of weeks? It was premature and unlikely to survive, particularly if we didn’t lift it off its mother, which is something we’re reluctant to do-cows make much better mothers for their calves than humans-but we felt we had to do it. We made it a cosy, straw-filled pen in a draught-free building and put it under a heat lamp. It’s a real cutie and still with us after nearly 2 weeks of 3 bottle feeds a day and lots of cuddles. Tam the cat rides shotgun on the final feed of the day at about 10pm, just to check that we’re doing the job right. Not long now until all the cows should begin calving and we begin lambing. That’s when the real “fun” starts. It takes over our lives and we become even grumpier with each other than usual.
What awful weather we’ve been having. We call it “hashy-bashy”. Gale force winds for days on end and torrential rain; a horrible combination. Whoever said there is no such thing as bad weather should try being a farmer, It’s not been 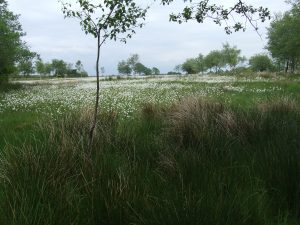 great for our Highland cows, which live outside all year nor for making progress with the fencing which I need to finish before I can start planting our new wood and hedges. The plants arrive on 16 March so I’m thinking of hiring a hovercraft.
Climate change must be a big factor in the wetter winters we’ve been getting. It wasn’t like this even 10 years ago. All the more reason to do all we can as nature friendly farmers to reduce our emissions and increase our carbon sequestration. Wins for nature can be wins for climate change too; all those extra trees and hedges will absorb carbon dioxide and getting more from our grass through better silage and less fertiliser should reduce our emissions. We’re on the journey, as we all are in NFFN.
The days are already drawing out, which makes life on the farm just that bit easier. It’s not easy driving heavy machinery in the dark. Yes, I made that excuse when I hit the lorry-not convincing when it was broad daylight. Anyway, we’re looking forward to the longer hours of daylight and the extra lives which we hope will come with them without too much trouble. The numbers dependent on Williamwood for their survival could double within the next few weeks as we begin calving and lambing in earnest. Here’s praying for some drier weather. It would make us all feel better. We can but hope.
Until next time…