Ditches are important. Many were originally dug over 100 years ago in locations where they were really needed. Improved drainage was historically a rather unsung feature of agricultural improvement to help increase the productivity and reliability of food production. Apart from designed landscape schemes there was no recreational ditching when you had to dig them by hand! They provide many functions to the farming system, especially when combined with in-field drainage system;

So how do we promote water voles, dragonflies and snipe, without risking field productivity or flooding upstream?

This short blog will describe a few simple measures that can be adopted by farmers, without significant investments in time or cost, to promote ditches as habitats without sacrificing their core function.

As with most habitat management, a patchwork approach is better than a large sweep in one area. If you are planning to do some ditching, consider breaking blocks into smaller areas. Perhaps only do one side of each field or ditch or per year. Ditching on a rotation that is spread across the farm will provide a variety of habitats, as well as the ability for species to move to nearby habitats if ditching is required.

Half a ditch, halve time.

A job that is done more regularly than digging ditches is removal of vegetation growing on the side of a ditch with a flail or hedge cutter. This can become a regular routine at a quiet time of year and with no agreed specification or control. The vegetation at the side of a ditch has several functions. It is a valuable habitat, but also works as a buffer strip to prevent the leaching of chemicals into the watercourse. Good vegetation cover on the walls of the ditch helps maintain the integrity of the ditch, preventing soil eroding into the ditch bottom and reduces the need to dig the ditch out and maintains the drainage function.

To maintain a healthy, manageable amount of vegetation consider only flailing one side of the ditch each year in rotation , such as the image below. 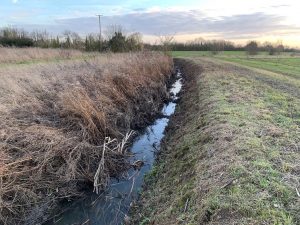 Cutting each bank on rotation helps maintain habitats for a variety of species, as well as allowing vegetation to maintain the integrity of the ditch wall and drainage functions.

A ditch or a pond? What about a p-itch? Vertical movements in the ditch profile

Ditches were designed and dug to efficiently transfer excess water from field to watercourse, minimal maintenance. We can maintain this drainage function, but greatly improve the wildlife value and slow down water by simple ideas when digging ditches out. Consider;

In the image below, we have built up some ditch spoil in this particularly deep, but relatively dry ditch. This has raised the water level but still below outfalls of the field drainage outfalls, providing a valuable habitat for aquatic species. A section of large bore drainage pipe has been used to maintain the flow of the ditch. Skilled digger work has also created a number of shelves just above and below the water level. Remember to remove or spread spoil from the edges of field margins as soon as practically possible. 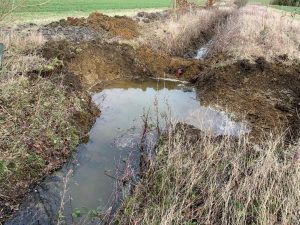 A bit of wiggle room – horizontal movements in the ditch profile

As part of the intensification of agriculture in the post-war period, many ditches were straightened to create field shapes that were more conducive to larger machinery and to remove water as quickly as possible. The fast flow of water in a straight line encourages sediment, pesticide residue and nutrients to pollute large watercourse, such as the rivers where ditches usually end up. Using machinery to create bends in ditches to ‘slow the flow’ can help prevent this pollution, as well as reducing flood risk downstream. The slower pace of water and altered ditch profile can also provide great habitats for wading birds and waterfowl without taking large areas of land out of production. This type of change does require a bit more thought than the previous suggestions, and a local wildlife advisor may be able to provide some advice. Below are some images of a ditch that was un-straightened into a small field that was not profitable to crop so instead is used for stewardship options. 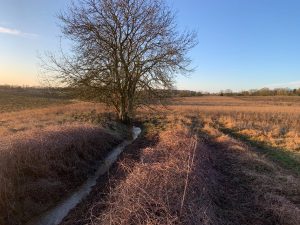 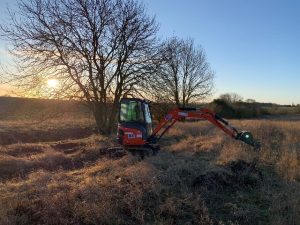 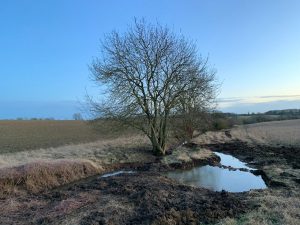 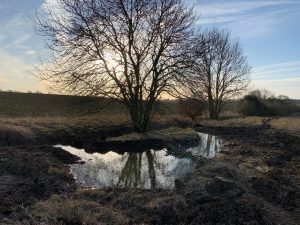 Wiggling a straight ditch can ‘slow the flow’ of the ditch, reducing erosion and pollution, as well as creating beautiful and biodiverse landscape habitats.

In this particular example, around 50m2 has been taken out of production. Using conventional yields of 10mt/ha (which this field would never get!), that is 50kg of wheat lost per year. At the current wheat price of £159, this area costs the farm £7.95 a year. The initial cost was 6 hours of labour and the hire of the 3mt digger for a day.

Over the years, many farms have lost ponds and many of the ponds that remain are often neglected and over grown due to the lack of support available for farmers to maintain or restore them. Using ditches as a means of creating habitat is one way nature friendly farmers can help to halt and reverse the biodiversity crisis. A combination of these methods and techniques across a whole farm will help provide valuable habitats without sacrificing the core function of ditches or the productivity of the farm. If you have a go, do post photos on social media using the hashtag #FABulousFarmers.

Callum Weir is the farm manager of the National Trust’s Wimpole Estate, a mixed organic farm focused on demonstrating sustainable land management principles. He is also the project manager of the FABulous Farmers project in the East of England.