County Down farmers making space for nature on their farms

Nature-friendly farmers across Northern Ireland are working hard year-round to protect and restore biodiversity. Their farms showcase nature-based solutions in action and how small changes to farming practice can help tackle the joint nature and biodiversity crisis. 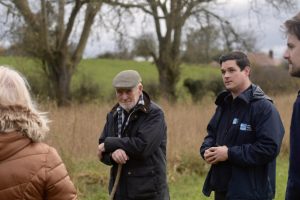 NFFN NI works with farmers and landowners across Northern Ireland through knowledge-sharing, providing advice and connecting with organisations, such as RSPB NI, to support entrants to the Environmental Farming Scheme. Actions such as good hedgerow management, growing rough grass margins or winter seed crops are steps that many farmers can take to maximise the room they make for our most endangered species, whilst enhancing the natural resources that underpin our food systems. 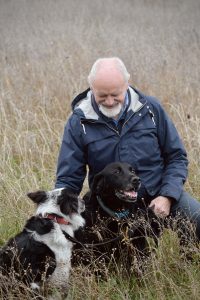 One of the biggest success stories is our involvement in the County Down Farmland Bird Initiative, comprising 20 farms and working alongside 80 farms in County Down. This is a group formed a few years ago within the Environmental Farming Scheme whereby farmers can access support by connecting with other farmers and receiving guidance from farm advisors to help give nature a home on their land.

NFFN and RSPB NI recently hosted a visit with the Guild of Agriculture Journalists on two farms taking part in the Environmental Farming scheme and the County Down Bird Initiative – Slievemoyle Cottages and River Farm. These two exemplary NFFN farms provided the opportunity for the Guild to see a future farming vision in which wildlife takes centre stage. Much of the conversation was focused on nature-based solutions and their feasibility on the average working farm.

One of the farmers stated, “when many people think of our landscapes, the line ‘Emerald Isle’ usually comes to mind, making it sound lush and positive, when really what we’re looking at are green deserts, miles upon miles of deforestation and species loss.”

Adopting even small changes to farms to make space for nature can halt and reverse the decline of priority species, such as farmland and wading birds. The Farmland Bird Initiative’s objective is to do just this, focusing on red-listed species (50% or more decline in 25 years, or are a species of global conservation concern) and amber listed species (25%-49% decline in the last 25 years). 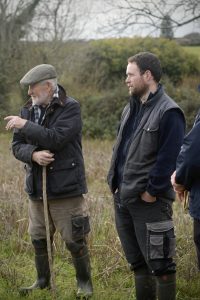 River Farm, owned by the Kelly family in Downpatrick, is home to owls, hen harriers, buzzards, foxes and pine martens. The wildlife corridors and winter barley encourage smaller mammals to come in and forage, in turn, providing a vital food source for in-decline predators such as barn owls, of which there are under 30 breeding pairs in the whole of Northern Ireland.

Slievemoyle Cottages, owned by the Lowe family in Downpatrick, has areas that have been likened to a giant bird table. Crops of quinoa, beans and barley species provide pollen and nectar for pollinators in spring and summer, and seeds for birds in Autumn and Winter. This is particularly important as we move into January and February, often known as the hungry gap, as hedgerows become depleted of berries and food becomes scarce.

Both farms also focus on mixed-species grassland and use grazing animals to roam, adding richness to the soil, spreading seeds and naturally fertilising the ground.

This landscape-scale conservation work is having amazing results.

On the Kelly family farm, the overall number of bird species has increased from 28 to 39 since 2017. Tree sparrow numbers have increased from three to five pairs and reed bunting numbers have been maintained at one pair. Given that yellowhammers are extinct as a breeding species in large parts of Northern Ireland, the Kelly’s have celebrated having 10 pairs on their land. 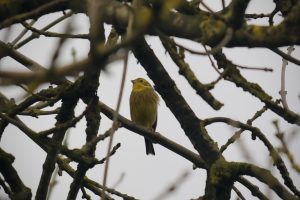 The Lowes Family Farm doesn’t yet have any comparative statistics as this was the first year it was surveyed, but we can already see just how biodiverse it is from the amazing work the Lowe’s are doing. At this year’s count, we recorded 47 bird species on this one farm, including five priority species such Kestrel, Lapwing, Linnet, Reed bunting and Yellowhammer.

By making a few small changes and putting nature in focus, both farms have seen flora and fauna thrive. These comparative statistics show how nature can bounce back once given a chance.